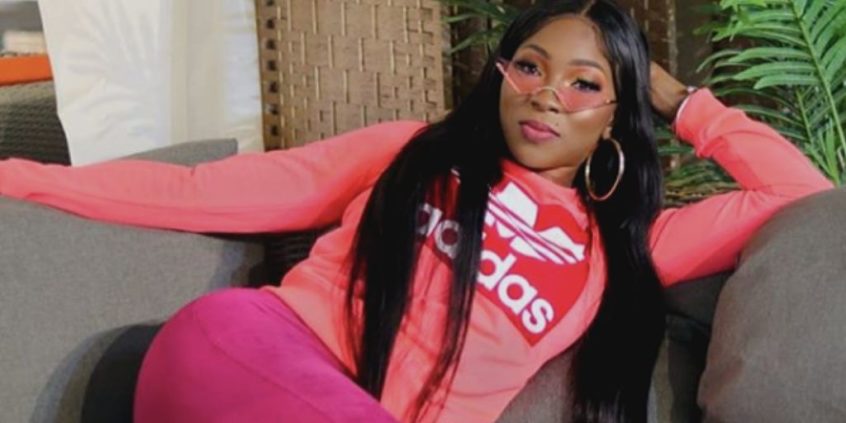 In case you missed it, soca star, Patrice Roberts was a guest this afternoon on urban radio station, Boomchampions 94.1FM. She had a nice one on one interview and vibes session with hosts, Kevin Baker, SupaHype, Showtime Selvon and DJ Keron who doubles up as Patrice’s official touring DJ. Thing is, the Patrice we heard this afternoon was so in charge of her interview that not even the tricky questions could scare her.The soca hottie who’s been maturing into her own in the past couple years, has delivered a number of big soca anthems this season. Songs like ‘Real Woman’, ‘Carry On’, ‘Happy Carnival’, ‘ Is We’, ‘Wha Yuh Know’ with Calypso royalty, Lord Nelson and others, have given the mother of one a beautiful catalogue to entertain fans with this carnival. Roberts’ personal life however, has been a matter of much public inquisition. On air, as she comfortably interacted with the guys, the singer fired back pretty matter-of-factly when asked whether she is single. “Not really,” she remarked coyly. Pressed to comment, she deflected like a boss as her daughter’s father, Ricardo Drue’s name came up. She would only say “a family that prays together stays together.”

Patrice and Ricardo have been spotted at a number of carnival events together. The status of their relationship however remains a matter of public speculation as neither of them have said they’re officially in a relationship. The duo have however proven to be very present, as a pair, in the life of their blossoming beauty, Lily.

Patsy certainly has grown into a powerhouse artist and we anticipate that her season will be as exciting of a public display as the speculation over her romantic life has proven to be. The soca star hosts her second Carnival concert, ‘ Strength of A Woman’ at the Normandie hotel on