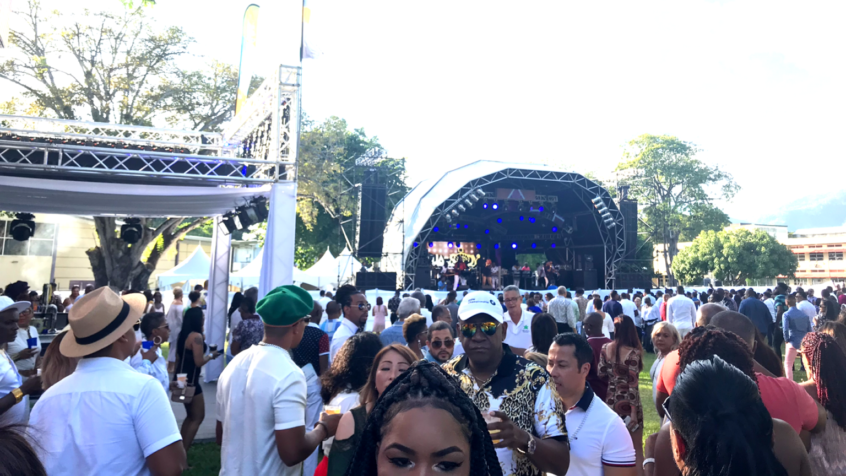 Say what you want about Patrice Roberts, the Soca star’s been serving it in the past couple years and by the look of things, she’s only just getting started. Several major Carnival anthems to her credit this season, Roberts proved her ability to manage anything when she took the stage at UWI’s annual All Inclusive Fete on Sunday evening.

An incredible lineup of performers that included the likes of Kees, Iwer George, Swappi, Shurwayne Winchester, David Rudder, Ravi and Nisha B and three time Soca Monarch King, Voice, the fete in it’s 30th year, offered patrons the expected ambience and not to mention an awesome array of succulent Caribbean and international dishes. Bar service unparalleled, patrons basked in the wide Angostura cocktail selection and of course, delighted in the tastes of JP Chenet, Absolut Vodka cocktails and Mandria Sagria. Certainly one of the most attractive fete layouts that offered the perfect combination of lush atmospheric beauty and attractive fetters, the UWI All Inclusive Fete, aptly coined, ‘White Diamonds’, delivered elements of Caribbean flair in a way that promoted our people’s ability to enjoy the finer things in life, when so desired.

n stage, Shurwayne Winchester – an artiste with many titles to his name, worked the early part of the evening with the Rhapsody Next Generation Band. He thrilled with some of his classic hits and delivered his 2020 offerings, much to the delight of patrons. Other caribbean stars like David Rudder, Ravi and Nisha B, and Swappi would follow, however, it would be Patrice who’d impress, delivering a set that was nothing short of exceptional. The superstar female performer managed to make things work, this despite kicking off her stage show without the accompaniment of the sound system – the music having failed as she was just about ready to deliver. Patsy would make light of the situation, willing the crowd to tell her what she should sing.

Happily, Roberts worked the stage at UWI fete, pouring out the vocals she may have been holding in for some time. Performances like the one we experienced on Sunday, are very rare this time of season- many artistes often trying their best to save their voices for the long haul. With less than a month before Carnival Monday, fans of soca can certainly expect to see and experience Roberts in full performance mode as the season climaxes. She’ll be at the upcoming Army Fete at the Queen’s Park Savannah on February 14th. Now… there’s a place she’s guaranteed to bring the energy! Get ready. We’re almost certain it’ll be out of this world!

CHECK OUT THIS SNIPPET OF PATRICE’S A CAPELLA PERFORMANCE AT UWI: