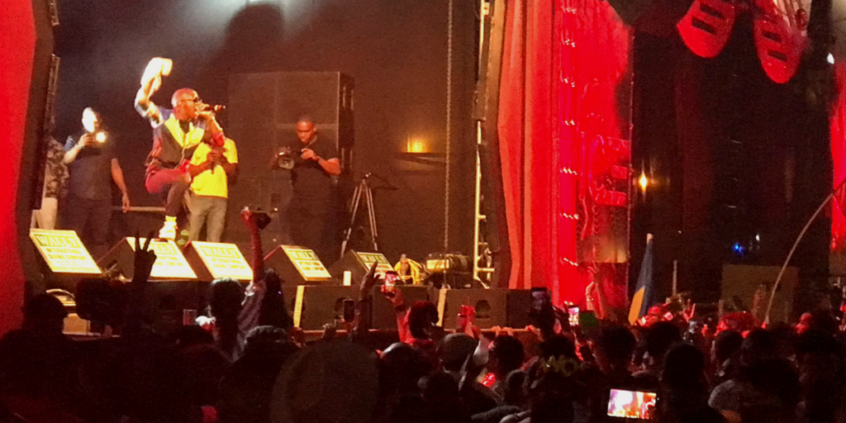 Published on 7th January 2020 By EBUZZTT

The C2K20 revelry in Trinidad and Tobago has officially begun. On Saturday night, carnival powerhouse, Tribe Carnival hosted Tribe Ice at the Jean Pierre Complex. Scores came out to fete their cares away and when it was all said and done, one artiste’s impact simply couldn’t be denied. Voice had cemented his status, making it very clear to all and sundry that the best is yet to come.

While Saturday’s event proved a far cry from what Wrightson Road, Port-of- Spain looked like years ago when fetes like Licensing and Fire Fete brought out the masses, the fete lovers eventually showed up. Artistes like Sekon Sta, St. Lucia’s Motto, Teddyson John, Viking Ding Dong, Grenada’s Skinny Banton and Voice were a part of the entertainment lineup. Each artist delivering their unique vibe, the crowed seemed ready to get their first real taste of the new music, live. Even artistes like Patrice Roberts and Ricardo Drue, spotted coupled up, and Iwer George, made their way to Tribe Ice, taking in the performances of their soca cohorts.

Skinny Banton kicked things off. He was easily the artist who many seemed eager to check out. His popular single, ‘Wrong Again,’ got the crowd amped up for what would come. Sekon Sta’s new soca tracks were well received, likewise Motto and newcomer, Viking Ding Dong, but it would be the young champ, Voice who’d bring soca lovers to a climatic state, penetrating the crowd with his melodious chants of rhythmic carnival tunes. His 2020 track with Kees Diffenthaller, ‘Dear Promoter’ was undeniably the song that enhanced the revelry on Saturday night. A clean stage show with little to no talk, Voice showed fetters that he could bring it, even amid much talk that groovy soca music has slowed down the pace of Carnival in Trinidad and Tobago.

As usual, the Tribe team out-did itself with the decor at the Jean Pierre Complex. Promotional brands lined the venue and the stage made for a pretty awesome backdrop for the artistes and DJs during their sets. Poison Sounds, the DJ outfit that would close off the night, did manage to catch the attention of some when they seemingly made a conscious decision to play only the instrumental of the extremely popular, ‘Gunman in She Hole’ dancehall track sung by Trinidad Killa. The artiste’s follow up single, ‘Dyy Zess’ was given fair and ample airplay throughout the night.