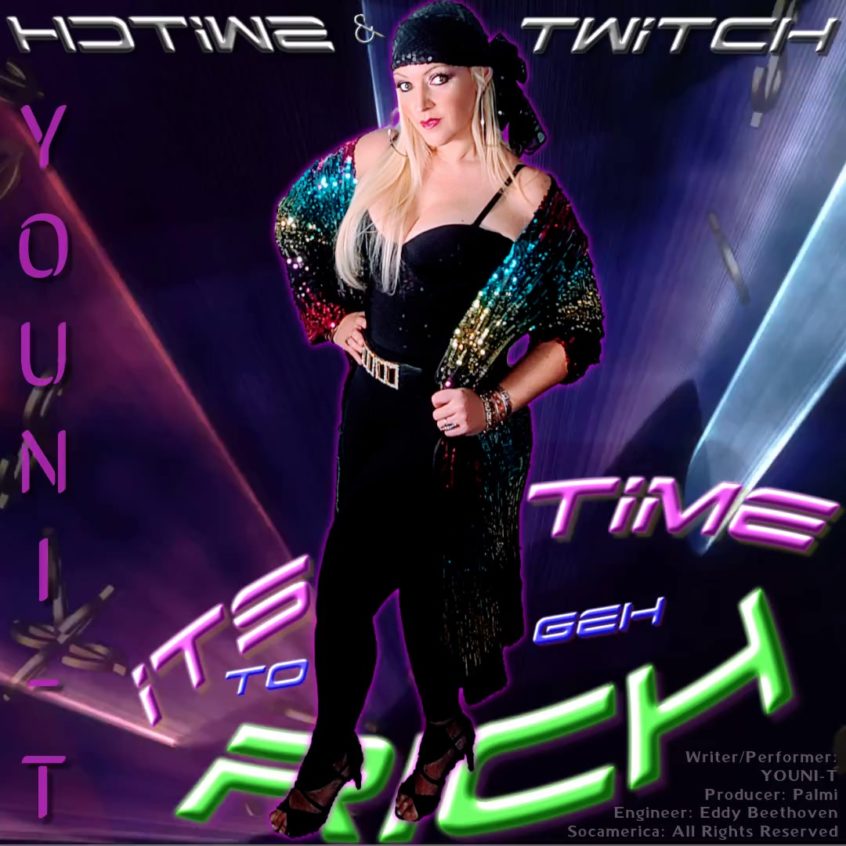 SWITCH & TWITCH – (Inspired by DJ Madman Smallie)
Written/Performed by: YOUNI-T
Produced by: Anthony “Palmi” Alexander
Engineered by: Eddie Beethoven
Released by SOCAMERICA: All Rights Reserved
YOUNI-T (pronounced UNITY) strikes again! The “IVORY QUEEN OF SOCA” is definitely a QUADRUPLE THREAT as she launches another QUADRUPLE HEADER! This round, she’s hitting you with her signature Soca foundation fused with Hip-Hop, Rap, Club Bangers and even a taste of African flavors as she continues to break the mold, bust out of the Carnival box and shatter the glass ceiling of Soca!
“LINK UP” tips the scale with a bit of street rumble and “weight” sure to bring the Jab Jab, and rough and ready crowds to their feet while also inspiring them to “link up, vibe up, and rise up.”
“SWITCH & TWITCH” was inspired by the spinning of Team Soca’s very own DJ- “Madman Smallie” (yes he knows, and granted his permission!) This one if definitely for the ladies who’ve GOT IT and want to FLAUNT IT! A high energy concoction aimed at putting Soca Music on the Mainstream Map and “gettin everybody RICH!”
“UMOJA SOCA” switches up the vibe yet again and channels the sounds of YOUNI-T’s adventures during her time living in Kenya. For those who don’t know, UMOJA in Swahili means, “UNITY.” The vision and the mission of UMOJA SOCA was to sprinkle the whispers of the Motherland with enough Soca and Dance energy to get the whole world Winin’ as one!
Last but not least, we come to the release of the 2022 “YOUNI-fied/Covered in Soca” smash hit! Every year since 2014, YOUNI-T has selected a major American hit to “Soca-fy”. This year, the nod goes to Ciara’s chart topping “LEVEL UP!” Adding her own lyrical twist along with her producer’s Socafication, YOUNI-T renamed her interpretation- “PUT EM UP.” As she states in her adapted lyrics, she is on a mission for “global socalization” and has definitely aimed this track at the ROAD WARRIORZ and Club Rumblers who can’t get enough of putting their FLAGZ, RAGZ and HANDZ up in the AYER!
Buckle up for a wild ride of Soca fusion like you’ve NEVER heard it before, coming to you straight from an Ambassador of Soca Music and Culture of Trinidad and Tobago that continues to reinvent herself, and Soca music, like no one else on the planet.
IG: @youni_t
FB Official: @YounitSoca Personal: @YOUNITsocamerica
TIK TOK: @younit_soca
Website: www.youni-t.com
Booking: USA: 786-348-1671